As part of my Year in Review I have delve back to pick out my top 5 photographs of the year. I hope you enjoy hearing about how the photographs were captured and I’d be honoured if you sent me your comments over on my contact page. This choice was incredibly hard to make and I changed the positioning and entries multiple times. Click on any couple name to view their full blog.

This photograph is not only my personal favourite but it seems to be one of the fan favourites also. No other photograph has attracted as many enquiries for work as this one has. Being challenged to capture a certain photograph is always a fun game. You rarely see a firework photograph which commands much though when you look at it and this is something I wanted to avoid when capturing this.

Analysing where the fireworks were going to appear I position Dan & Laura under the concrete pagoda at Weston Hall. I was adament I didn’t want to take a photograph of their backs with them facing away from the camera. On the other hand though I did not want them facing towards me either. I settled on a side position and separated them apart so you could see their outlines more clearly.

The best part of this image is they still got to enjoy the fireworks for a good five minutes as this was taken in the first 30 seconds.

Due to being taken at the end of the year this photograph is still yet to receive it’s criticisms as it’s not been showed in many places. When I met Tor and Lee in the early parts of the year they spoke so passionately about their wedding which made it incredibly hard to wait almost a year for it to come around.

They spoke multiple times about having one long table instead of lots of different round tables. I’m not 100% sure for the reason of doing it but I love the idea none the less. They were keen for me to capture a photograph looking down the length of the table so once again I rose to the challenge.

Positioning flashes 1/3 and 2/3 of the way down the outside of the long table I was able to light the majority of guests. I then chose to silhouette the couple as I often like photographs where anyone can be the person within it. It really helps you absorb the situation and I think this photograph is no exception it.

Bags of atmosphere with crisp silhouetting. This is why this photograph is my number 2 on my Top 5 Wedding Photographs of 2017

Taken i the earlier part of the year these two Mother In-Laws laughing has taken a firm number one slot in my natural photographs. I couldn’t recreate this photograph if I tried a 100 times.

I’d come out of the church and photographed Louise & James as they came out. People then crowded into a small space where we were going to do the confetti photograph. As people were getting ready and the Groomsmen were handing out confetti supplies I thought it appropriate to capture a few naturals. It was only when I literally got stuck between a person and a wall, I look to my right and captured this photograph as it was happening.

A moment caught in time putting this photograph in the number 3 slot of my Top 5 Wedding Photographs of 2017.

i’m always looking at the next way to create an interesting looking photograph. I’d already done a couple of instax style shots before so thought it appropriate I lay off this trick for a bit. I can remember like it was yesterday coming up with this idea the week before the wedding. I’ve always wanted to do some sort of Bride and Groom so close but can’t see each other kind of photograph. This usually requires both people getting ready in the same place. So I thought, why not bring the bride to the groom…on an Instax.

I took the photograph of Laura first at her house. I then took the photograph to Matthew at the church and made him hold it without looking. An finally I made them both hold the final one at Weston Hall. I call it Incep-stax because it’s a Instax, within an Instax and then within a photograph.

Something a little different allowing this photograph to steal the number 4 slot in my Top 5 Wedding Photographs of 2017.

Of all the photographs featured in my top 5 this has to be the hardest. Sarah & Andrew told me about their plan to have a Ceilidh band at our first meeting. As I always say, I’m always up for something a little different and a little more exciting. I don’t think any Bride and Groom ever imagine theselves flying down the dance floor, hand-in-hand with a kilt and flip flops on. Part of the reason why this photograph is so awesome. Yes you want to look glamorous on your wedding day but when you look at the photographs you also want to be reminded of how excited and in love you were for the rest of your life to begin.

I positioned a flash off camera directly behind the couple. I had my signature wide angle lens with a flash lighting them from the front. This photograph required just the right moment where you could see both of Sarah and Andrew’s faces whilst also taking up a nice proportion of the frame. I’m so happy with it.

Fast action, fast thinking, fun photograph which tells more than meets the eye. This is why this photograph is my number 5 on my Top 5 Wedding Photographs of 2017. 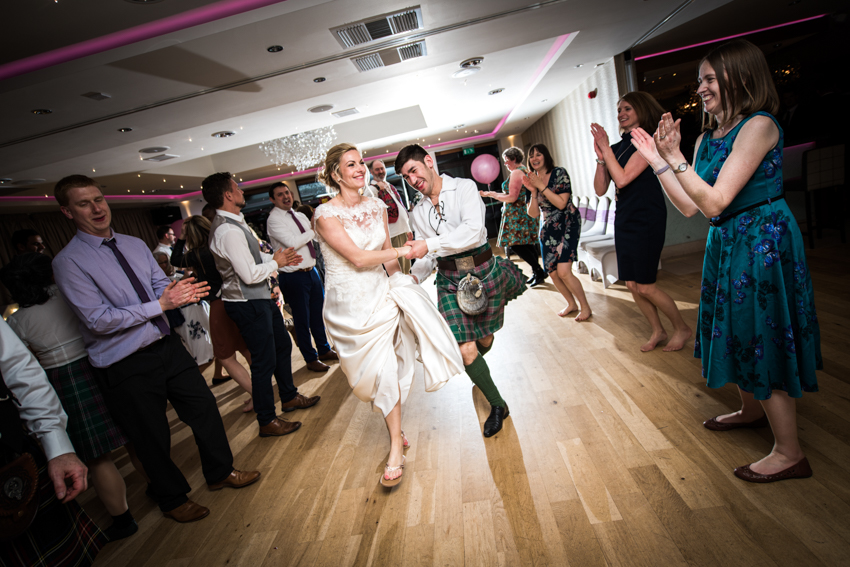