Rainy Atmosphere at a Gwynedd Wedding

About three years I drove 2 hours into Wales to capture two my best friends saying “I Do”. It was a little magical place where all of nature seems to collide in one beautiful setting. Having seen these photographs Cat & Calvin got in touch late last year to see if I was keen to return for their Welsh countryside wedding.
With said friends now living in the area I’m often down this way and was hyper to get the invite back to such a magical landscape. Nestled in the shadow of Cadair Idris in the valley below is one of the best Welsh countryside wedding venues.

With Sarah’s health being what it has been for the last few years we’ve leant on local holidays to give us our adventures. Wales is a place I never expected to love as much as I do now but every-time I pass the border now I feel so much more relaxed. Cat & Calvin feel the special-ness of the place and this common connection between the three of us was definitely a great feature to this Welsh wedding.

With Cat & Calvin only recently having moved to Manchester from The Big Smoke I was quite surprised when they said they were looking to escape the city vibe completely for their Welsh countryside wedding. It stopped surprising me though as they started to describe a little more about the kind of day they’d envisioned. A day all about spending such an intimate moment with their nearest and dearest. Every wedding is awesome to be involved in but a wedding where the day guest list is only 34 means so much more to me. I’ve no where to hide, I’m on show all day and I’ve got to really put my personality to the test to make everyone feel comfortable. My couples know this also so it’s always an honour to be chosen.

Planning your wedding day in the Welsh Countryside?

A few of my Favourite Moments from this Dolgellau Wedding

I’ve heard some great laugh out loud moments before in services but Calvin produced an absolute corker at this Welsh countryside wedding. Fighting against his nerves and his emotions he slipt with his words pronouncing Cat as his awful wedded wife instead of his lawful wedded wife. Obviously an unintentional mistake which was quickly corrected but gave us some fantastic laughter.

Whilst we were down in between the marshes on the estuary getting a few shots in before the main meal came out we had a little great moment. Working alongside a dear friend recently she mentioned about having the bride throw her dress in the air which I absolutely loved. Since then I’ve used it on another wedding and then also mixed it up for this wedding. With Cat’s stunning Suzanne Neville wedding dress she didn’t have much of a train and was concerned it was a little non wedding dress looking so she went for a big veil. With the wind playing some serious games we could never really lay it out so i just mentioned whilst we did this certain photograph that she should put her arm through it creating possibly my favourite photograph of the day. This coupled with Calvin in two of his three piece Marc Darcy suit just makes the photograph.

Being a Welsh Countryside Wedding Photographer

Being at the mercy of the Great British weather is one thing but when you’re photographing a wedding in the Welsh countryside it’s a whole different ball game. Being at the mouth of Afon Mawddach where the mountains, land and water all collide with the sea you know you’re in for a challenge with the weather. When I was last at this venue we planned a little moment where we went off to take photographs at a local bridge and Abbey ruin. Being 3 years and having a thirst to reshoot these beautiful locations myself, Cat and Calvin planned these stops into this day also.

Unfortunately the Welsh weather put these plans under some serious threat. With a close eye on the weather app we managed to jump outside and capture all the major family portraits and a confetti photograph first. Just as we were to roam a little further afield the heavens opened and laid our plans to waste.

Instead we decided to do some bits later after the speeches and the meal where we’d have a gap in the proceedings. Unknowingly though the best friend of the groom stood up to give a great secret speech. this coupled with 3 other awesome speeches pushed our time back a little further than we’d expected.

Noticing the light dissipating rapidly I had to make a decision. Cat & Calvin following their starter got up for a bit of table chat so I took this moment to jump outside again and capture some portraits for 10 minutes. Cat braved the nearby Welsh countryside through Calvin’s heroic carrying her into the space and I managed to capture some incredible portraits of the two of them.

I had said we could go to the Abbey ruins and the bridge the next day if it was nice but as seemed the norm for my short stay in Wales it just persisted to rain the entire time with little to no rest bite. For this reason I, Cat and Calvin were so happy we took those 10 minutes to disrupt their meal and capture what could never have been if we’d have left it.

A back garden wedding in Nuneaton 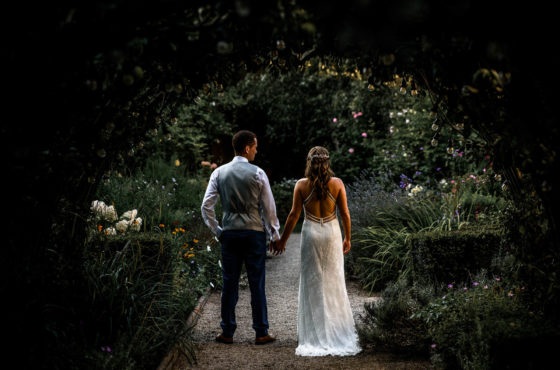